Our site uses cookies to provide a better experience for the user. If you allow it just click the 'Agree' button and this space will be hidden, if you want to know more click on the link 'More information'.

The City of Arts and Sciences

he work of Valencia’s own Santiago Calatrava, this is an example of architecture at its most futuristic. The colossal structure houses an IMAX cinema (situated in the Hemisfèric), as well as Europe’s largest aquarium – the Oceanogràfic, interactive educational exhibits in the Príncipe Felipe Science Museum and the avant-garde opera house - Palau de les Arts Reina Sofía. Furthermore, the impressive l’Assut de l’Or bridge and the Agora – the main venue of the Valencia Open 500 tennis tournament – are all a delight for the senses.

This ancient district of the city grew between two walls; the Islamic and the Christian city walls. A wander through these labyrinthine cobbled streets, lined with towering mediaeval buildings will transport you back in time to another era in history. Enter the mansion houses, cross the mediaeval gates of the Serrano and Quart towers, and meander into every corner – don’t miss it! 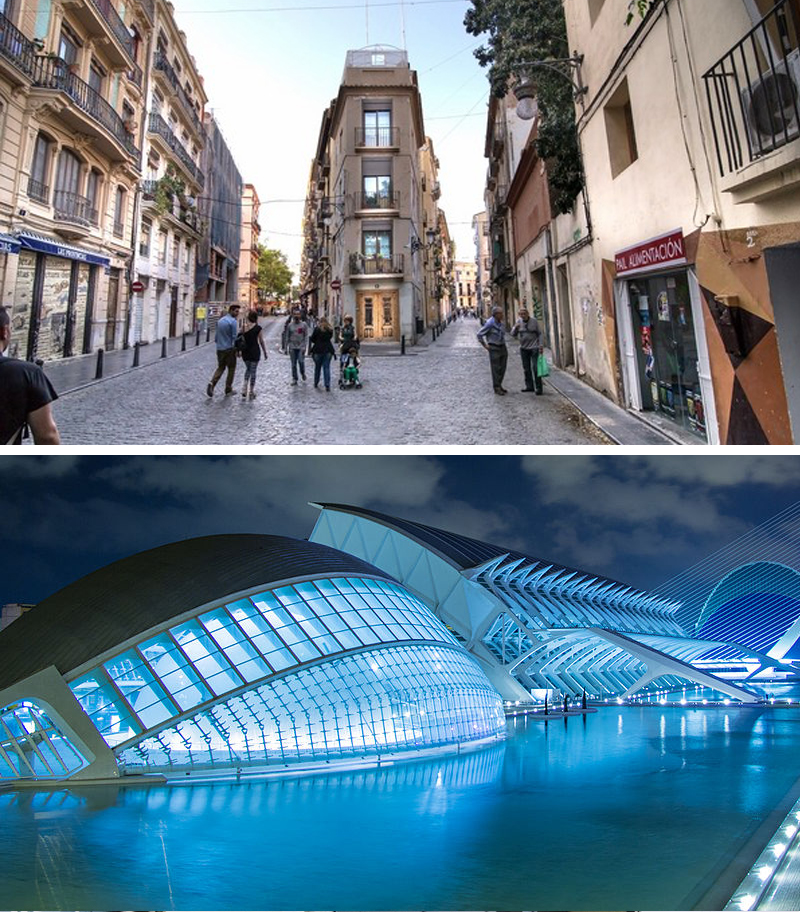 Twenty-one centuries of history right at the heart of the city, where you’ll find such historical treasures as Valencia Cathedral, the Micalet, the Basilica of the Virgin and the Almoina. Don’t miss the Tribunal de las Aguas (Water Court), a UNESCO Intangible Cultural Heritage (noon on Thursdays).

Immerse yourself in one of Europe’s biggest markets, the Mercado Central, situated inside a jewel of pre-modernista architecture, and enter into one of the most iconic examples of Gothic architecture in Europe, the Lonja de la Seda, declared an Intangible Cultural Heritage site by UNESCO. As well as these, make sure you squeeze in the Santos Juanes Church.

34 museums to choose from, offering art, history, architecture… Soak up 18th century Valencia at the Museo Nacional de Cerámica (National Ceramics Museum), situated in the Palacio del Marqués de Dos Aguas. Muse over pieces by Sorolla, Goya or Zuloaga in the Museo de Bellas Artes San Pío V, get familiar with the Fallas in the Museo Fallero or contemplate the contemporary art pieces on offer at the IVAM and the MUVIM.

In a triangular layout, eclectic architecture, a central fountain and colourful flower stalls brighten the landscape. It’s surrounded by some of the city’s most iconic buildings, such as the Plaza de Toros, the Estación del Norte, the Ayuntamiento de Valencia (town hall), the Edificio de Correos (post office) and Plaza Redonda, to name but a few. It’s best known for playing host to the "mascletàs" celebrations, which take place during March, and during the Fallas.

The Albufera Nature Park will transport you to a world of untouched, pure nature where the only sounds you’ll hear are the birds singing and the sound of the water. Unspoiled by and protected against man, the reserve is located just 10 km out of the city. A visit here will show you the Valencian passion for the environment and help you to discover the origins of our gastronomy

From east to west, Valencia is brimming with activities – both leisure and educational – to familiarise you with the animal kingdom, with such activities as an African safari through the Bioparc or a tour of the underwater world in Oceanogràfic, where you’ll be able to see tropical fish from as far as the Arctic and the seas of Japan. Get the ‘nature pack’ for lots of great offers.

A garden covering 9 km and situated on the old bed of the River Turia. This is a true green area, stretching from the west of the city to the east, reaching as far as the City of Arts and Sciences. Explore by bicycle or train. Also absolutely worthwhile is a pit stop at the Palau de la Música, pausing to enjoy the unique bridges which cross it from north to south.

The Royal Marina and Valencia's beaches

The Juan Carlos I Royal Marina is one of the city’s most important landmarks, not only due to the events that are held there, but also due to its unique buildings. It houses the 19th Century Harbour Sheds, the Edificio del Reloj and the Veles e Vents building, the emblem of the new Marina. There are also shops, terraces and restaurants with spectacular views, as well as a children’s park, the Superyachts Berthing with its amazing yachts, and the North and South Marinas, filled with numerous boats.

Just a few metres away are the beaches of El Cabanyal (Las Arenas) and La Malvarrosa, next to the attractive Paseo Marítimo promenade. We suggest you try a delicious paella in one of the seafront restaurants, or have a drink in one of the bars. For those who prefer a wilder kind of beach, we recommend El Saler, next to the Albufera Natural Park.

Come and meet us,

Visit our office and we inform you about the accommodation, the work´s offers, the activities, and all the information you need.

Universal Students is a spanish company created in Valencia since 2003 with the mission of covering the needs of the foreign students.